Q: What was your last 5 star read?.
Illumicrate August 2022 Unboxing - Knowledge is Power ⚔️
Q: Favorite romance book you've recently read?.
Q: What's your favorite picture book or children's book?.
Q: What is your favorite book you read in July?.
Q: How has your summer been going? Do anything fun or anything you still want to do?.
Join 2,974 other subscribers 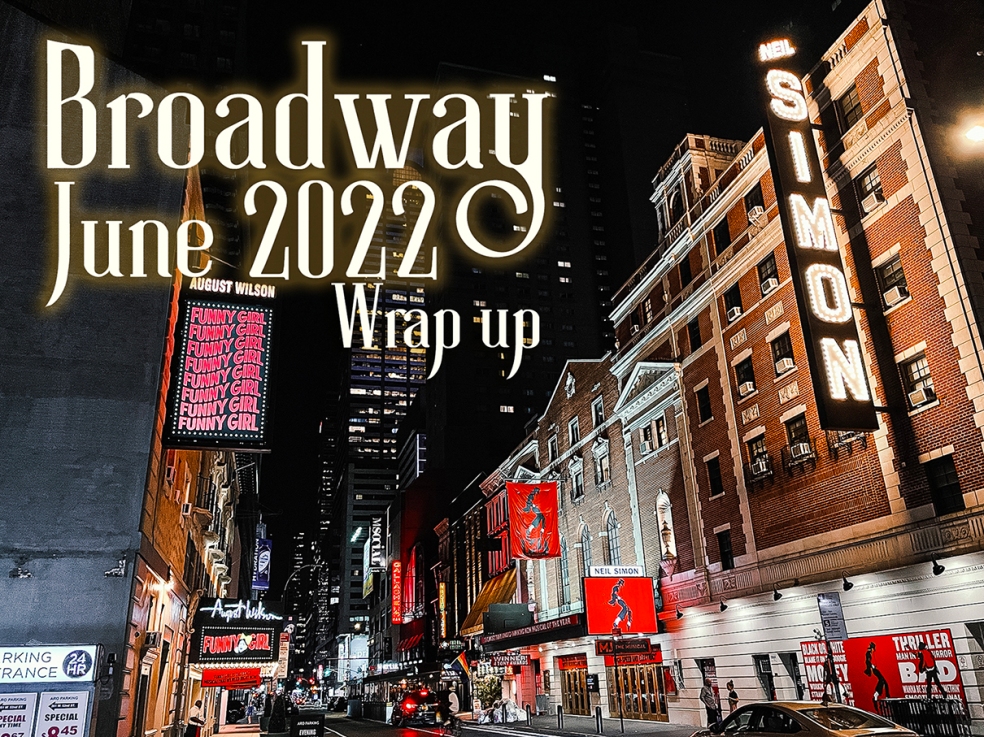 I ended up seeing 12 Broadway shows in June – this seems to be about my new average per month!

I was able to write up individual blog posts for quite a few shows this month, including Moulin Rouge, A Strange Loop, Freestyle Love Supreme (tour in Philly), and The Music Man.

If you’re looking for the Bookish Wrap Up for June 2022, click here!

The start of Pride month and I didn’t get a Pride playbill? Blasphemy. (I know, I know, they still have May ones and they’re using them up.)

Tonight was the first time since apparently November 24, 2021 that the entire cast was in. No understudies/swings – wild not getting any paperwork with my playbill!

And it was my first time seeing the new cast. Last Broadway show for me was May 8th and I saw the tour in Chicago on May 13th so its been a bit of a break (lol) and….I like the new cast. I really do.

We had center orchestra seats but towards the back and I’ve actually never sat there before, so it was a nice view!

I wrote a full blog post on my thoughts of A Strange Loop which you can see here!

Checked another new show off my list today by seeing A Strange Loop! I really wanted to see this one before the Tony’s because I have a feeling it’ll win a lot of awards and then be really difficult to see/rush/win lottery for. It’s nominated for 11 Tony’s, the most this season, so I’m curious to see what it wins!

This show is different from whats on Broadway now. Its so very queer and so very Black and worth everyone seeing it at least once.

I swear I didn’t plan to be back less than a week later, but on the plus side, I FINALLY GOT MY PRIDE PLAYBILL YASSSS!!!

Tonight’s seats were in mezzanine, which isn’t a place I sit often, so honestly it was nice to see the show from a higher vantage point for a change, I didn’t mind it! (But back to orchestra next time pls)

6/11-12/22 – Freestyle Love Supreme was one of my all time favorite shows I’ve seen on Broadway back in 2019/2020 before the pandemic, and it brought me so much joy seeing it again when it reopened for a limited engagement in 2021/2022. While it is currently closed on Broadway, Freestyle Love Supreme (FLS) is touring the country and I decided to make a quick trip south to Philadelphia to see FLS over the weekend!

I ended up seeing the show 3 times over 2 days in Philadelphia. It was A LOT and I wrote up a full blog post, which you can read here!

I thought it would be fun to see a Tony Award winning show the first performance after the Tonys, so when I won lottery for Company, it seemed like the perfect opportunity! I’ve seen Company before but it was the week Patti LuPone was out with COVID, so I figured, hey, I should actually see her!

…welllll joke was on me, because as I was on my way into the city, I got an email saying Patti LuPone would be out for this performance too. JUST MY LUCK!!!!! I was upset but alas, the show must go on.

Just as in March, I saw Jennifer Simard play the role of Joanne. And she was fantastic! Don’t get me wrong, she’s amazing – but I also have nothing to compare to…

And Matt Doyle won a Tony Award for his role as Jamie and his song is my favorite in the entire show! He got loud cheering as his scene came on, and a standing ovation once his song was finished! That was a lot of fun to experience!

I liked that I knew the show/storyline now so I could pay attention to different details. Its a good show overall, not my favorite, but a solid show. Personally I don’t think I’ll be seeing it again – I’m just not meant to see Patti LuPone! I’m not against seeing it – but I won’t be entering lottery unless someone else invites me or wants to go.

Hugh Jackman is out of The Music Man this week due to COVID, so Max Clayton has been on in the role of Professor Harold Hill. I decided to see if I could grab a $49 rush ticket to see him and what do you know, I could! I saw posts saying people grabbed a rush ticket ~10 minutes before curtain so I figured I’d try my luck Friday night and I had no problem grabbing a ticket!

I honestly never thought I would see Music Man again because rush is just so difficult to grab and regular price tickets are $200+ easy, but I’m so glad I could see it again!

I really loved being able to see The Music Man again, and wrote a full blog post with all my thoughts & a handful of photos!

When The Moulin Rouge lottery calls, I have no choice but to answer. I promise you, I really didn’t plan to go again in June! But I had nothing to do Saturday afternoon sooooo here I am back at the Moulin Rouge for a Saturday 2pm matinee!

I truly love this show so very much and I’ll never be tired of it – if someone asks if I want to see Moulin Rouge, the answer will *always* be yes!

Saturday evening I finally got around to seeing Macbeth on Broadway andddd I literally have no idea what I watched.

Thankfully the playbill had a card insert with the synopsis of Macbeth because I never had to read it in school, so I didn’t even know the plot! That helped a little bit but truthfully I was lost most of the performance. Normally I like going into shows not knowing too much, but in this case, I think it only hurt me….whoops.

I thought all the actors did a phenomenal job, Daniel Craig and Ruth Negga in particular were both amazing! I heard some people say Daniel Craig wasn’t that good but idk what they were talking about because I thought he was great! Amber Gray who I had previously seen as Persephone in Hadestown was Banquo and I guess she was good IDK IDK THE PLOT OF THIS SHOW.

Macbeth is open until July 10th so I guess go see it if you want? Its not one I would recommend but then again most people know what they’re getting themselves into…

Harry Potter and the Cursed Child

Got in my monthly viewing of Cursed Child thanks to a friend winning & inviting me!

I’ve come to the conclusion I just shouldn’t bothering winning Friday Forty anymore bc my friends *always* get better seats than I do, and I’m happy to be a +1! We got 2nd row seats and I’M SO HAPPY!!!! Such a good view, and from the right side! Usually I’ve been sitting on the left, so this was a nice change!

Ahhh I love Cursed Child and happy I was able to grab a Pride Playbill!

In a literal first for me, Edward James Hyland was out – I HAVE NEVER SEEN HIM BE OUT! I didn’t know he *had* an understudy! (I mean, technically I *knew* he had to, but you know what I mean.) Ted Deasy played the role of Amos Diggory and (spoiler???) Dumbledore and – let me tell you. I usually don’t like this character but Ted’s portrayal of it was so fresh and much more serious than Edward usually plays it and I honestly loved it! Even towards the end when Dumbledore says, “There are things that death cannot touch. Paint . . . and memory . . . and love.” Edward always goes up on that “paint” line and people laugh – Ted said it completely seriously and I really felt that, and I appreciated that. He’s also a much more angry Amos – like, I’d genuinely be scared of him, but Edward never scared me. SO HAPPY to see another actor in this role for once!

We had Sarita as Polly/Myrtle/Lily Potter and she’s a pleasure to watch. Myrtle is a fun role no matter what but I loved seeing Sarita in the role again, pretty sure I’ve seen her before, but I love her!

There were a few other understudies but these were the two noteworthy ones imo!

So happy to see Cursed Child again, I haven’t been since the end of May so I was due for another visit.

Sneaking in one last show in June and one last Pride Playbill – seeing a new show for me, Funny Girl!

I quite honestly had NO idea what this show was about other than it was a comedy, but thankfully the plot was easy enough to follow and I enjoyed it!

I tend to enjoy stories set in the past more than contemporary stories, so this was perfect, since this was set in the ~early 1900s.

I thought Beanie Feldstein was wonderful in the leading role, her singing was phenomenal and she was pretty funny! I was not familiar with the cast but there were a LOT of cheers for Ramin Karimloo – and he was also amazing and looked great doing it

Jane Lynch was great as Mrs. Brice and I loved Jared Grimes as Eddie Ryan! Omg his tap dancing was so good!! I didn’t realize this show would have so much tap dancing but I always enjoy that.

This audience was very enthusiastic and clapped and cheered and gasped in all the right places. Overall I did like this show! I don’t think I need to see it again but I wouldn’t be against it.

I’m really happy with my June viewings! I’ve checked off everything that I wanted to see on my list – I will now have a new list in July with new shows opening!

Do you like musical theatre?
What’s your favorite musical or play?